By those who followed his revolutionary career, Gio Ponti has rightfully been described as a “designer of a thousand talents."

An architect, furniture designer, magazine editor, and lecturer who somehow also found the time to chase such leisurely pursuits as poetry and painting (while publishing nearly 5,000 letters and illustrations, no less), Ponti’s body of work seemingly knows no bounds. His completed architectural works can be found in 13 countries, with his Pirelli Tower still maintaining a watchful eye over his native Milan to this day. His furnishings, which range from one-of-a-kind lamps and cabinets to mass-produced chairs, can be found in the catalogs of over 120 companies.

Suffice it to say, Gio Ponti’s body of work was as diverse as it was inspiring

“When you have someone who created as much as Ponti did, you realize he is many things to many people,” says Paul Donzella, owner of Donzella Gallery in New York City.

“His work was always quite distinct though, so there is often no mistaking things designed by his hand. If you discover Ponti and are drawn to his work, there is an endless amount of things to discover about him. An onion with endless layers to peel back and be revealed.”

Born in Milan, Italy, in 1891, Ponti’s career was almost immediately derailed by the widespread chaos of World War I. An architectural student at the Politecnico di Milano University at the time, Ponti was forced to postpone his studies to serve as a captain in the Pontonier Corps from 1916 to 1918, during the course of which he would receive the Bronze Medal and the Italian Military Cross among other accolades. After the War, Ponti completed his degree and began his career in the world of industrial design, developing products under Richard Ginori, the illustrious ceramics workshop founded on the outskirts of Florence in 1735.

It wasn’t long before Ponti began collaborating with local artisans and architects to carve out his space as a master of the neoclassical and minimalist styles, and by the 1920s, he had not only constructed such grand displays as the Bouilhet villa in Garches, Paris, but founded the now-legendary Domus magazine.

As an architectural designer, Ponti was obsessive —a micromanager on the most micro of levels. Never simply satisfied to let his towering accomplishments stand on their own, he would devote every remaining moment he had to their interiors, custom crafting each and every detail of his lavish homes and hotels to fit his grand vision. From porcelain centerpieces, to custom molded bathroom fixtures, to kitchen cabinets and the spoons and plates held there within, Ponti rarely left any aspect of his creations to an outside influence. Many of his completed architectural works—from the 1956 Pirelli skyscraper in Milan to the 1971 North Building of the Denver Art Museum—still bear his imprint from the outside in.

Although Ponti’s name will forever be associated with his groundbreaking Superleggera chairs, he was by no means a designer who allowed his vision to be compartmentalized.

“He was never really part of one movement,” says Gaspare Asaro of Italian Moderno.

“His style was always a little bit different from anything that was done at the time, because he was not only just a modernist, but to some extent, one of the first post-modernists. [Designing] to him wasn’t only about function, like it was for the original modernists. It was a lot about the aesthetics, and finding howworks from the past that could become modern.”

One needs look no further than Ponti’s Cassina armchairs to get a feel for his sleek fusion of form and function. Originally designed for one of the many ocean liners whose interiors Ponti helped modernize following World War II, the Cassina combined the Italian master’s instantly recognizable diagonal legs with a sturdy, yet elegant top, not only providing incredible comfort, but preventing it from shifting during a ship’s journey. 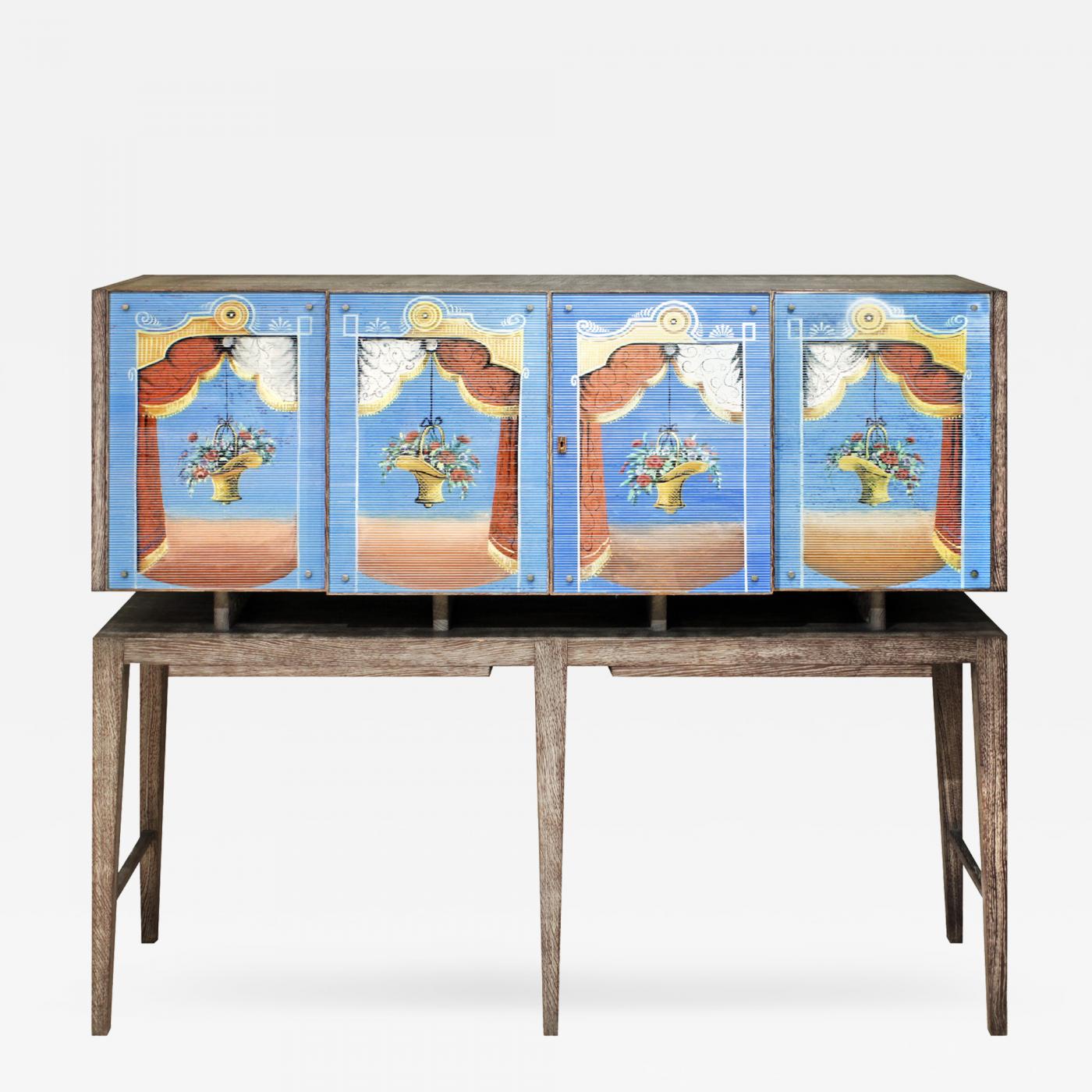 A perfect encapsulation of Ponti’s completionist-based approach to design is his 1939 cabinet shown here, its floral motif appropriated from a large wall mural bedecking an entrance hall in a Mediterranean villa. “It’s beyond incredible...an absolute masterpiece,” says Evan Lobel of Lobel Modern. Befitted with Ponti’s signature skinny legs of limed oak and reverse painted glass panels, the attention to detail and brilliant craftsmanship of the piece are two aspects that not only made him such a success, but propelled Ponti (and designers like him) to the heights of influence that can still be seen in the work of modernist designers.

“Gio Ponti was one of the bridges to the modernism we know today, an innovator in showing people the path to beautifully crafted and beautifully designed pieces. The value of their work will continue to increase as awareness increases about just how important they were.”

Ponti is the sixth artist to be featured in a series on makers of contemporary furniture, after Eduardo Olbes, Gary Magakis, Jacques Jarrige, Karl Springer and Alexandre Logé.

By Jared Jones
Back to PRESS